It's starting to get colder, but I keep on working in the garden. I'm celebrating fall in Oak Hill Cottage Garden by planting garlic! 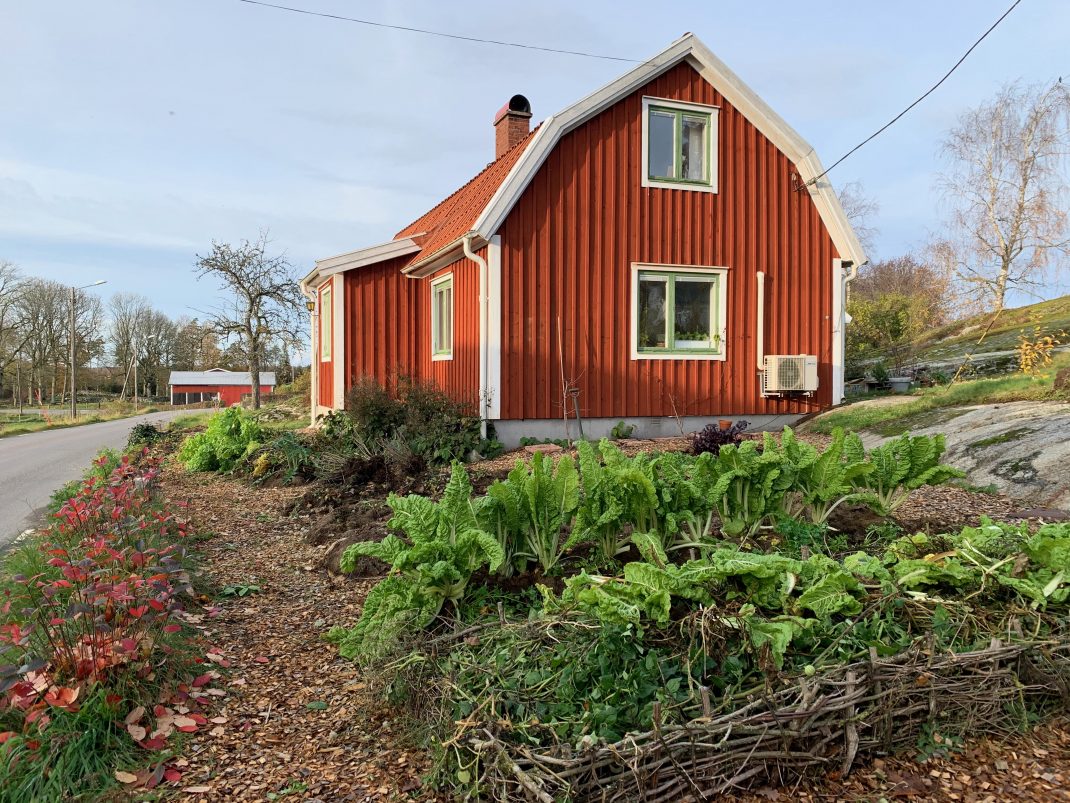 It's fall in Oak Hill Cottage Garden! The lady who used to live here, Anna Thor, had a nice little garden up here on the hill. She made a bed right along the stone wall, but then the next owner planted a ridiculously short aronia hedge here. The berries are great, but the hedge is just way too short, and doesn't cover the entire wall. I started removing it, plant by plant in September, but I didn't have time to get it all before the end of the year.

October was a really rainy month for us. We rarely notice the excess of water in the kitchen garden though, most of it just trickles down to the little swamp next to the pasture right by the garden. Oak Hill Cottage though, well that's another story. It gets incredibly wet! The water basically gushes down the hill and the water from the roof creates little streams by my driveway, which just looks like a muddy chaos by now. I'm going to have to do something about this next year.

Despite the weather, I wanted to keep gardening of course! So I went out to plant my garlic in the muddy soil. I'm happy that I invested in a GoPro camera to document this project.

I don't want to brag, but I have to say that I'm quite good at growing some vegetables. Growing your own food is just such an amazing feeling. I think that gardening might just be my forte, right after mothering of course. My favorite is cabbage! So, I guess it doesn't come to anyone's surprise that I decided to grow lots of it, plus plenty of broccoli here on the hill. This time, for a late harvest.

The variety is called Baby Matsuri and I usually grow it in summer at home in the kitchen garden. This year is my first time growing it for a later harvest though, but I'm a bit disappointed that it wasn't as hardy as some of my other varieties. I'm going to tell you a bit more about how to spot frost damage in the video below:

Here are some other pictures from October: 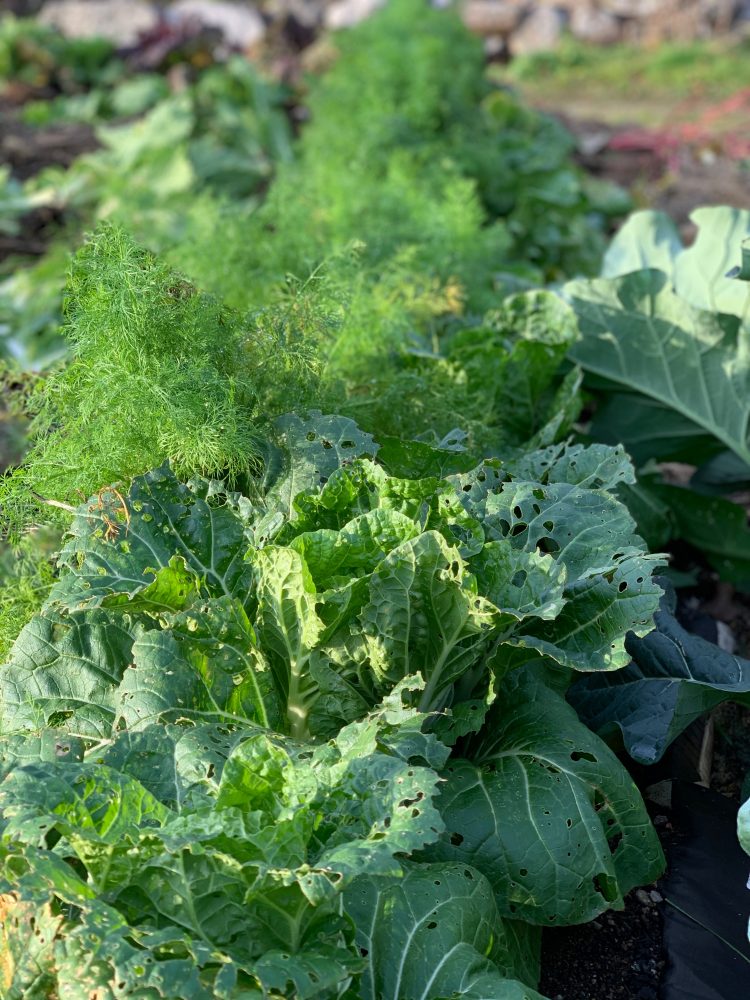 Napa cabbage and dill are doing just fine in my beds, I was able to harvest the last plants in November. I made plenty of dill pesto for my evening snacks, and it just tasted divine. You have to enjoy the small things in life! 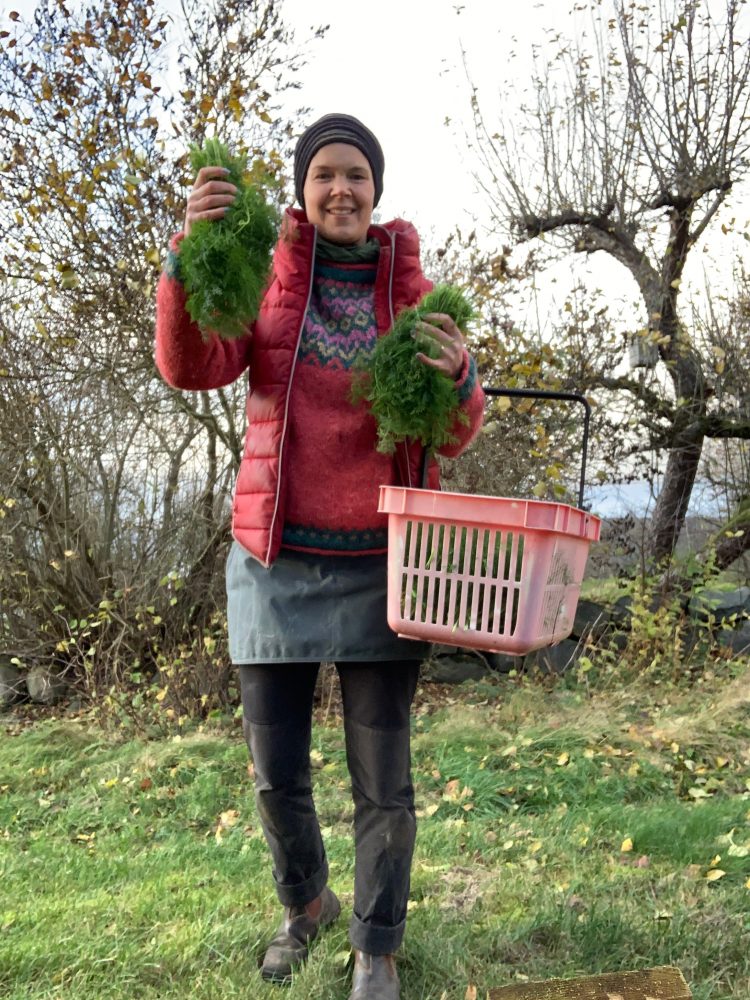 Perhaps not the sharpest picture, but still! This is what my newly harvested dill looks like. I gave plenty of it away to neighbors and friends, and my husband was tasked with cutting and freezing the rest. We have so much dill in the freezer now! You never know how next year's harvest will be, so I might as well freeze as much as possible. 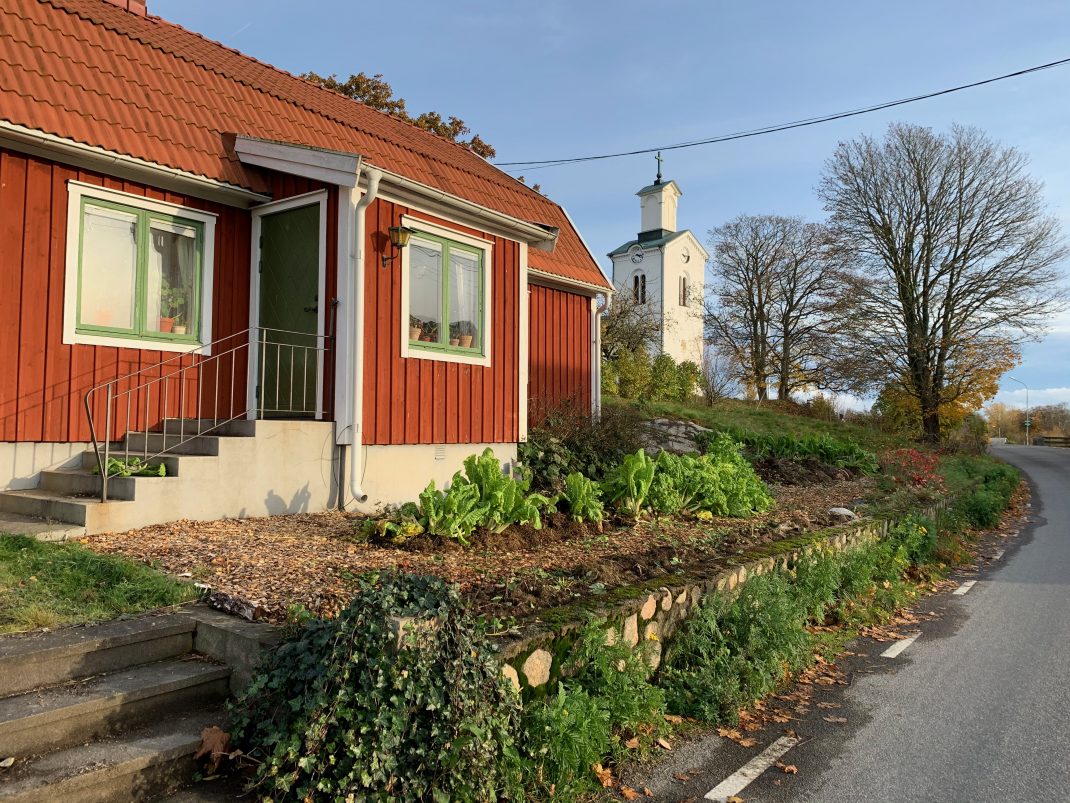 The leaves are falling and I moved my sunflowers, New Zealand spinach and most of the vegetables away from the front bed. 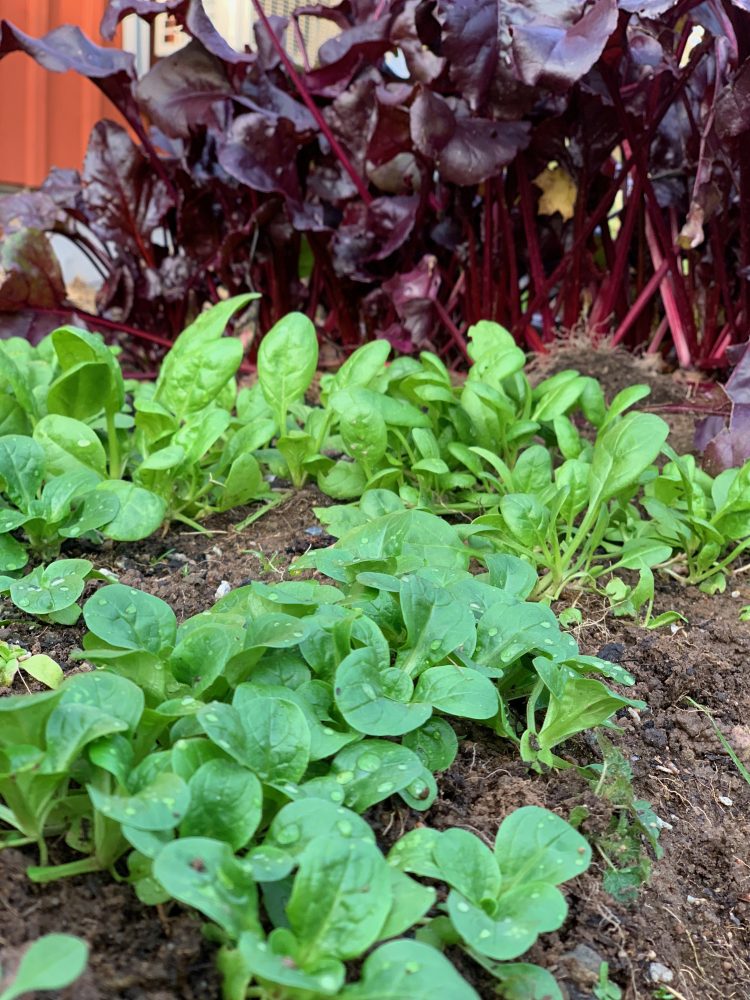 The spinach and lamb's lettuce I sowed in late summer is thriving, just like my beet Bull's Blood that I planted a few months ago. 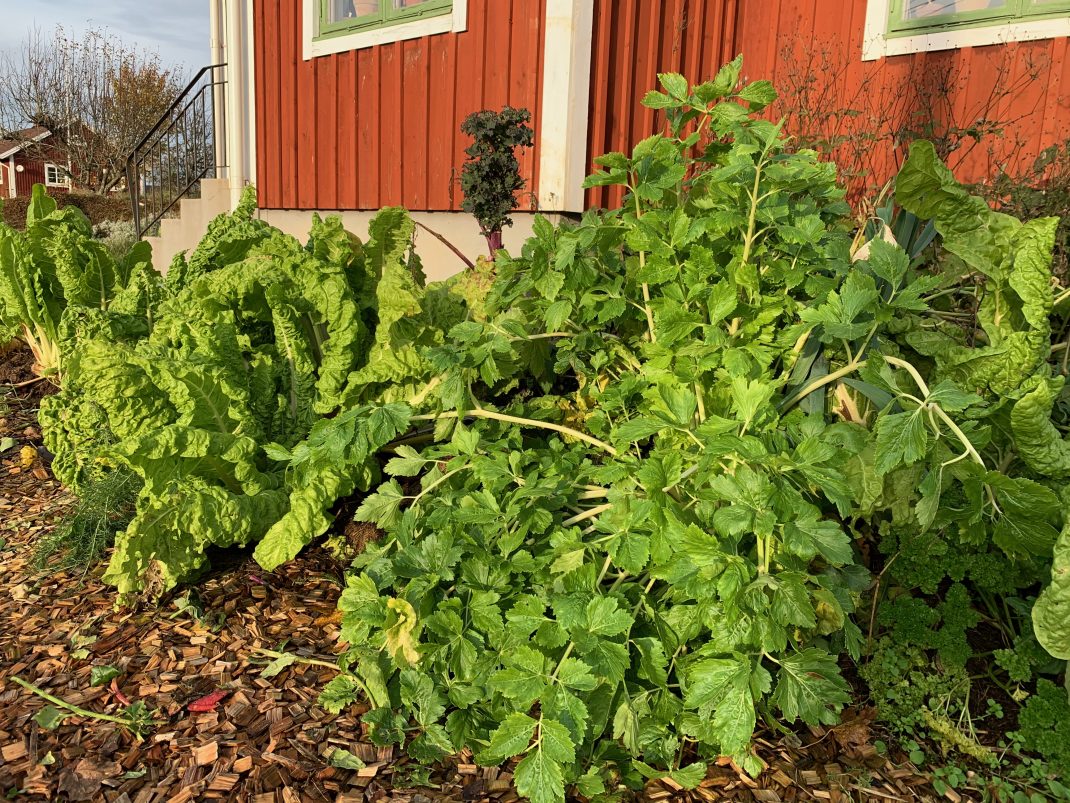 I'm so happy to finish the season with these lovely green plants still growing i my beds! The Ukrainian celery with white stalks has been doing just fine, despite a few cold and frost-ridden nights. This variety was unexpectedly hardy! 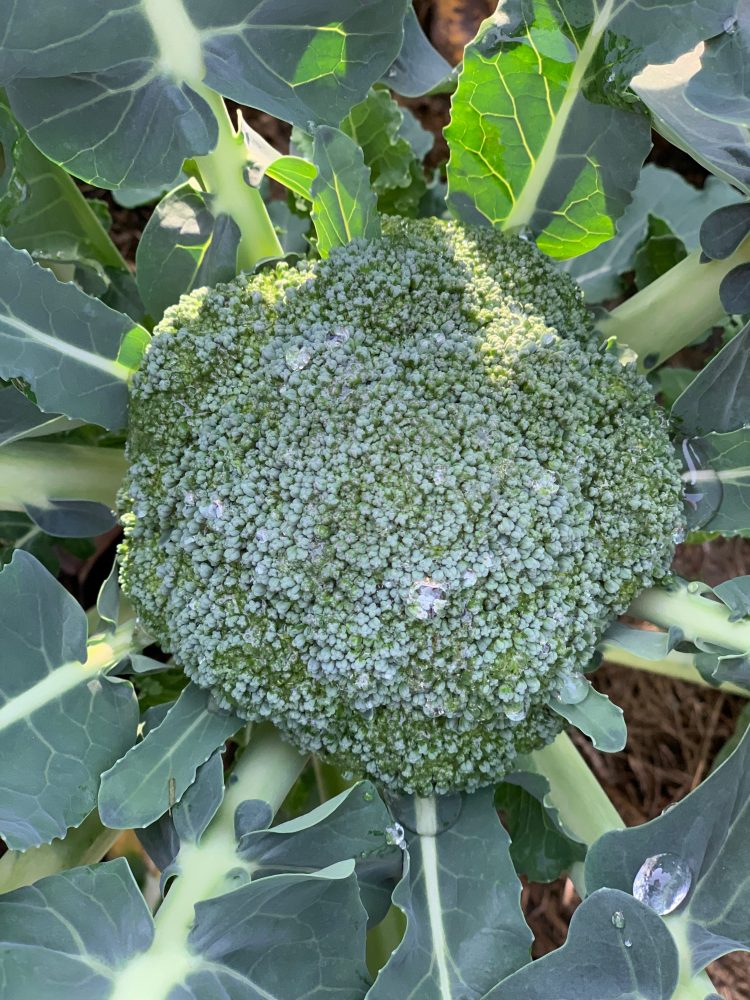 All in all, I got four good-looking broccoli from my beds at Oak Hill this year. Don't forget that you can eat both the leaves and stems, it's a real delicacy in my opinion. 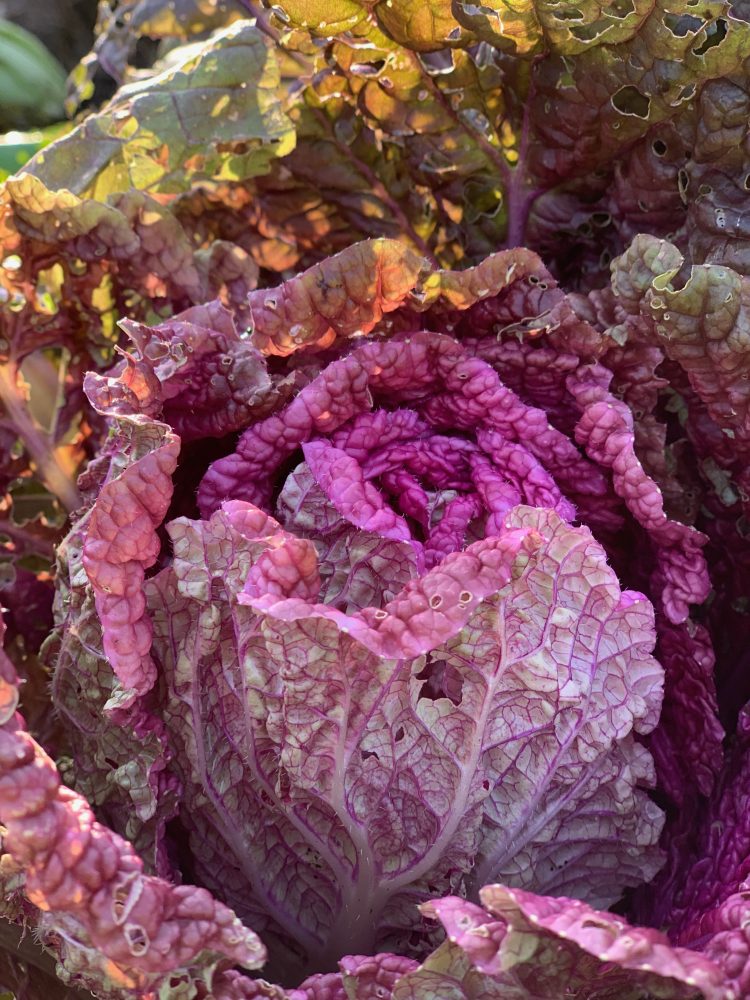 I absolutely adore this colorful napa cabbage Scarvita. It's so beautiful, with the vanilla white and the hot pink together. This is the color of fall in Oak Hill Cottage Garden.

I'm going to post new videos from Oak Hill Cottage every week on my YouTube channel. Don't forget to subscribe and hit the notification bell so that you don't miss any new videos!

And of course, you can continue to read more about Oak Hill Cottage on the blog too. I hope you are excited about this project! Let me know what you think in the comments below. 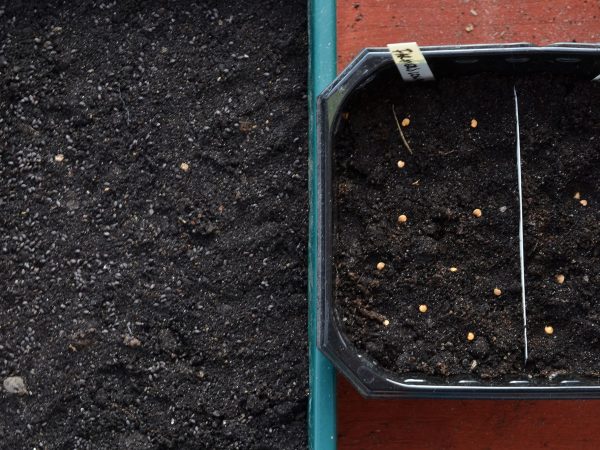