I tried winter-sowing beets this year. I did it in two different ways and got lots of beautiful plants in my garden. But did I get any edible beets? 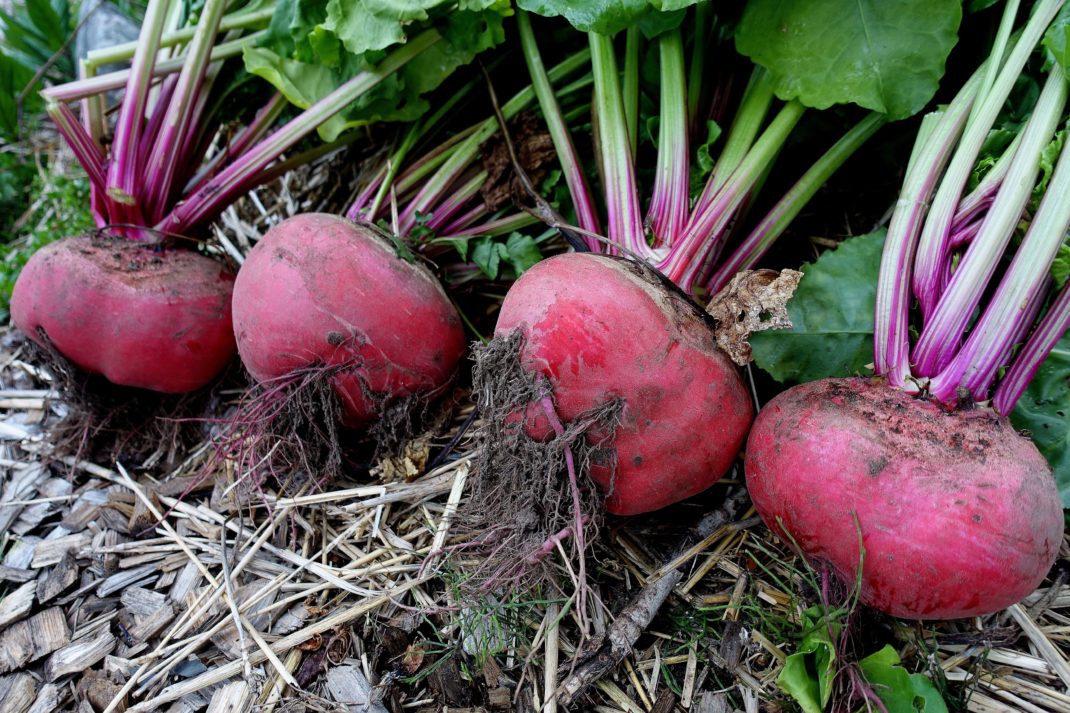 Winter-sowing beets – can it be done? I tried doing it in pots. Only a few of them didn't bolt.

This is my second year winter-sowing beets. The first time I tried it was in 2012, and it really didn't go well. I sowed my seeds outdoors and practically didn't get any beets at all. My guess is that my seeds were washed away by the rain and the snow. I recently met another garden enthusiast here in Sweden who has actually had great results winter-sowing beets. That's when I decided that I wanted to try it again! I wanted to do it differently this time though. 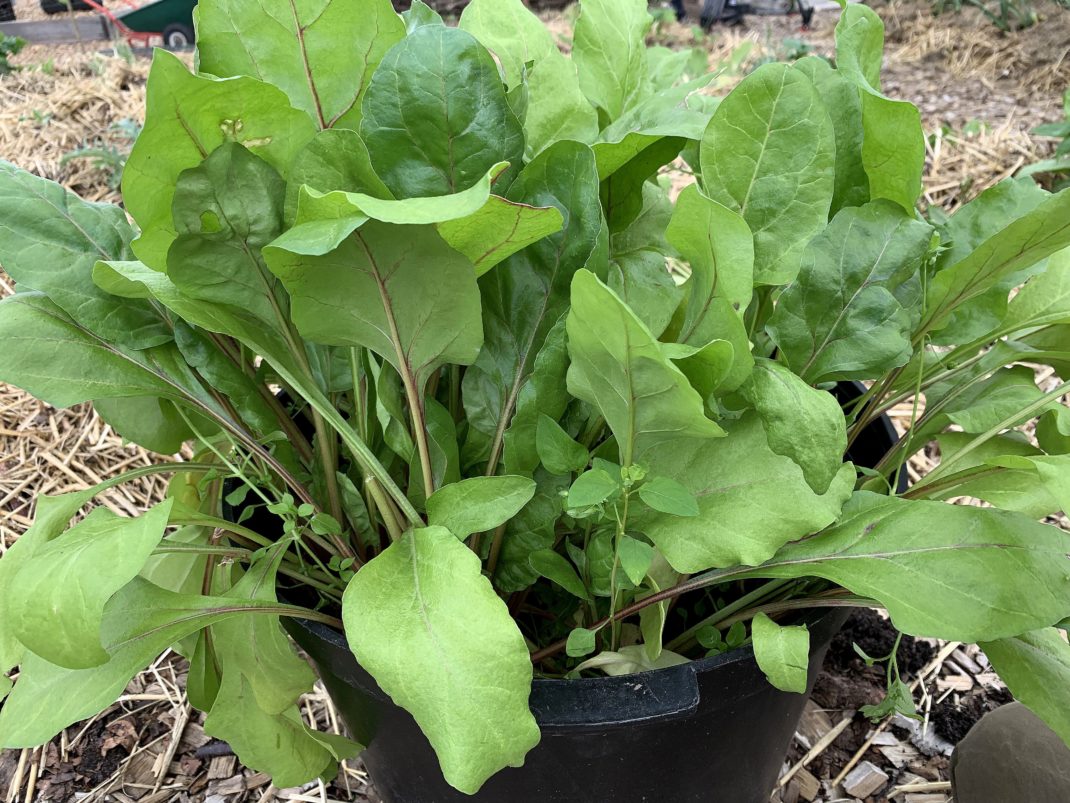 This is what the pot looked like in May when I planted the beets outside.

Winter-sowing beets in the polytunnel

I sowed my 2012 beets (chioggia beets) in a large pot in my polytunnel, late winter. The pot was already sitting in the polytunnel and I sowed the seeds as I went along. My idea was to let the beets grow in the pot until it was time to harvest them. But then I changed my mind a bit later. In May, I planted the beets one by one in a mulched bed.

It was very cold this spring and we even had frost a few days after planting the beets. Almost all of my beets starting bolting, one by one in early summer. They looked so nice in my bed that I just couldn't bring myself to harvest the beets when they were the right size though. I only harvested a few of them, and they were absolutely delicious. Most of them were still in the bed though, and they grew extremely large. Some of the flower stalks were almost 6 ft 7 in tall! And of course, none of the bolted beets were edible though. Far too tough.

Since then, I have been thinking about what could have happened if I had left the beets in polytunnel pot instead. What do you think? It would have been 23-26 degrees (around -4 degrees Celsius) even in the polytunnel the night when everything froze. I don't think that the beets would have been spared, not even with row cover on top. 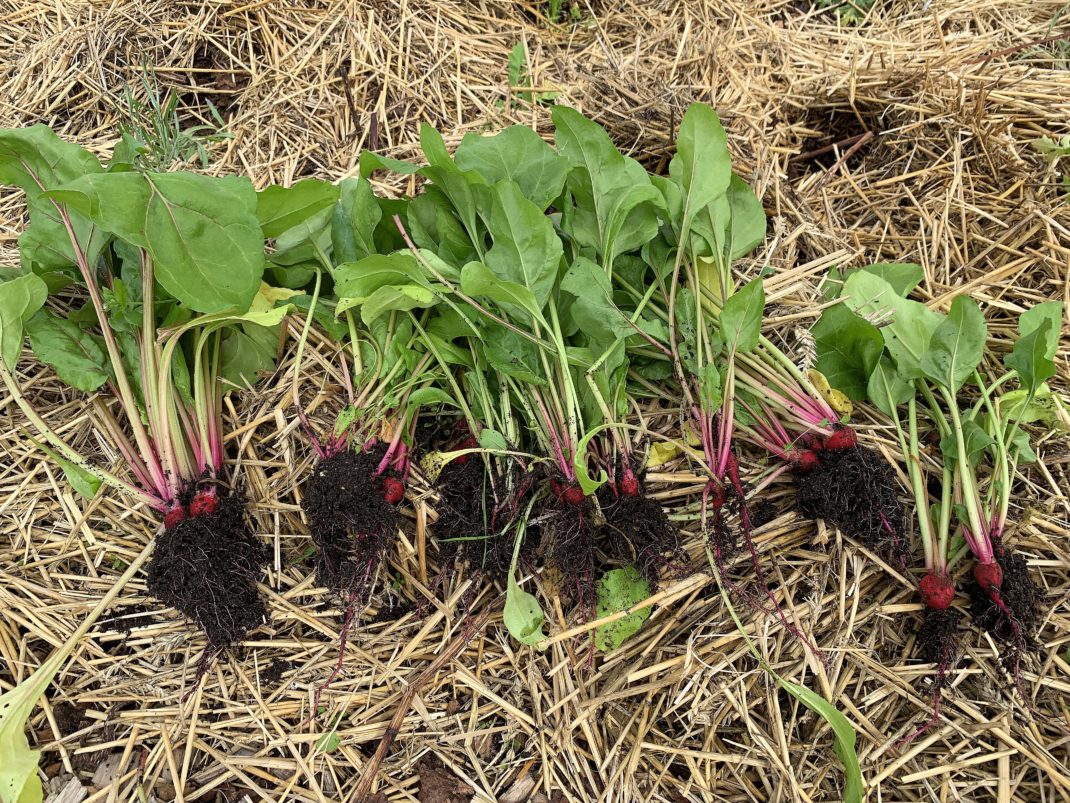 I divided the little beet clusters and planted each little section. 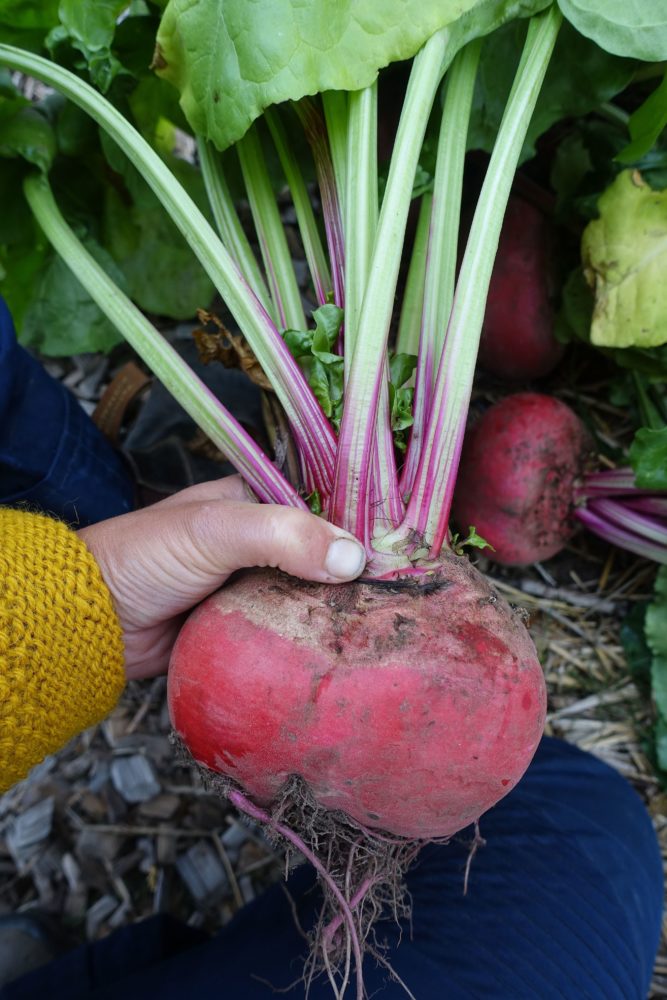 Most of my beets bolted, but I got a few at least. The large chioggia beets were not as tasty as the smaller ones though.

I tried to do a sowing outside too, this time in late winter instead of late fall. I wasn't completely happy with the experiment since everything I know about beets after all speaks against winter-sowing them. One of the most protected beds in the warmest part of my garden got to house a few regular beets, I sowed them in March.

Most of the seeds germinated a few weeks later and made it through the temporary cold spells in spring. After that, I watered a little more and added some mulch. And then, almost all of them bolted at the start of summer. As expected. 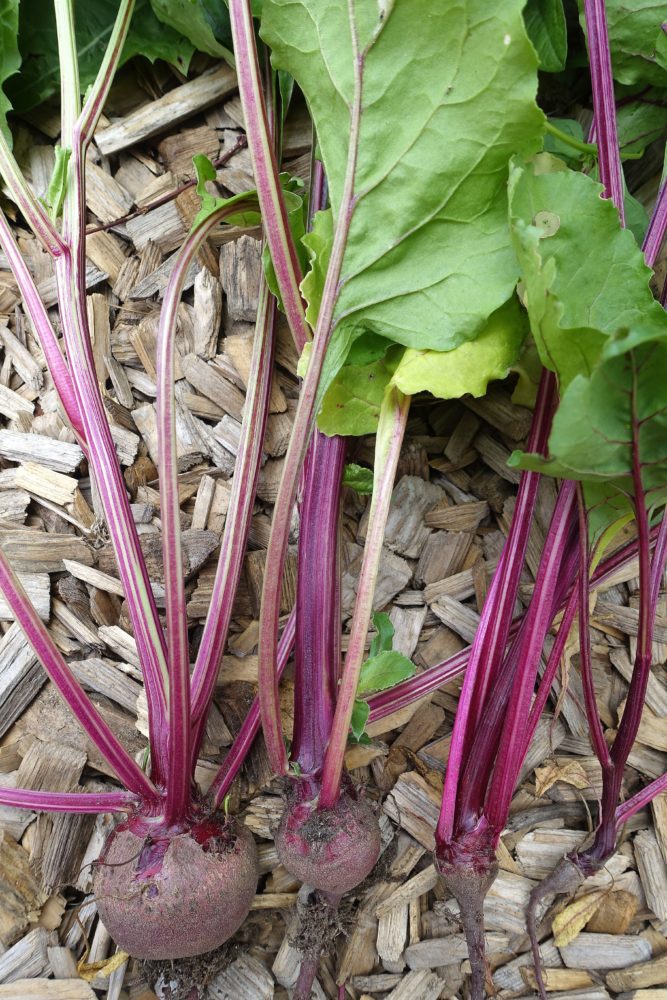 This is what I ended up with when winter-sowing beets. A tall flower stalk in almost all of them. 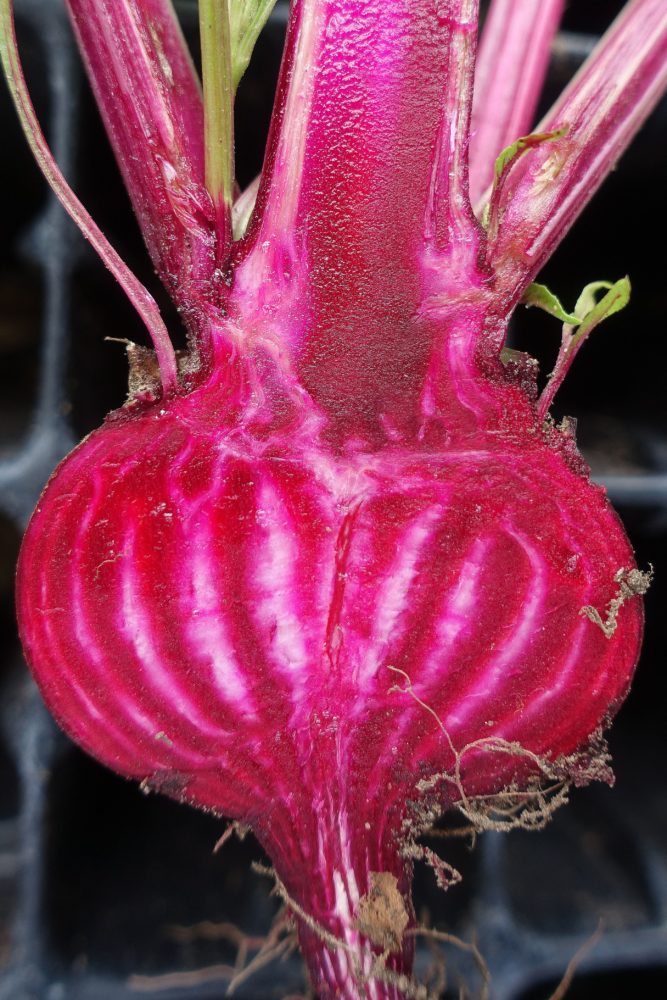 A large stalk develops when the plant bolts. This makes the root hard and unpleasant to eat.

Why do they bolt?

Beets are biennial, just like parsnip and carrot. They develop a root clump in year one. After that, they overwinter and bolt to set new seeds in year two. If they germinate early in the year and suffer through a colder period, the plant will react as if winter has come. So, then it gets ready to set seed. In my experience, carrot, parsnip, and black salsify are ok with winter sowings. They bolt occasionally, but not very often. Could the beets be extra sensitive perhaps? I have asked other experienced gardeners about this, and they say that the seed is not necessarily the problem. Rather, the plant adapts to the cold very quickly.

Generally, my recommendation is to sow beets in heated soil, to minimize the risk of bolting. 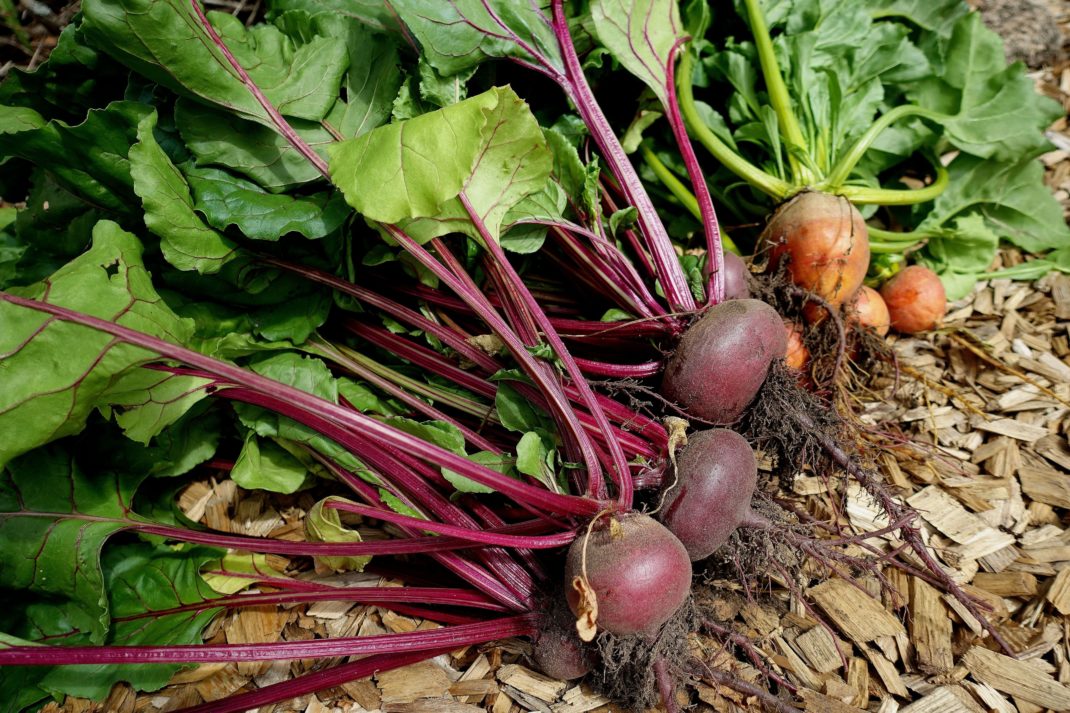 That's more like it! I sowed these beets in a plug tray in May and planted them in the same spot as my winter-sown beets.

Winter-sowing beets works, the seeds can rest in the cold soil and still germinate nicely later. If you want to grow beets in a spot where the temperature fluctuates a lot, then I would instead recommend sowing in spring. But a winter sowing of beets is perfect if you want to grow the beets for the greens instead.

As always, there are of course exceptions. Where we live (south of Sweden), the risk of sudden changes in temperatures is a lot smaller farther north. It's probably easier to winter-sow beets up there. But every spring is different of course, so you never know. It might work one year, and the next it just doesn't. I didn't like my results this time so I think I'm going to wait a few years before going at it again.

Did you try winter-sowing beets? How did it go?
/Sara Bäckmo