When the first frost arrives in the garden

Oh no! A pristine white layer of frost recently covered my lawn in early morning. My plants look like glass statues. What should I do about the frost in the garden? 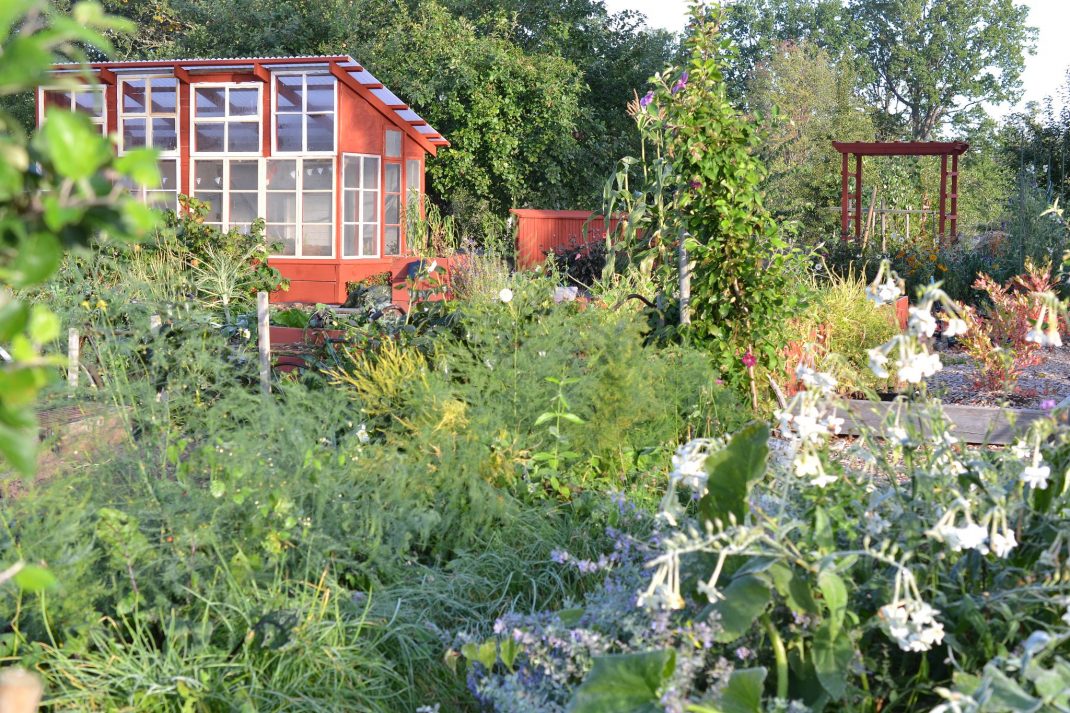 Apparently, it's time for frost in the garden! You can't see it that well when the plants are still frozen. Things really start to fall apart when they thaw though.

When the frost arrived this year, I was completely unprepared, but I guess it's here now! It's often quite cold here where we are. Even our neighbors don't get freezing temperatures as often as we do. And my little cottage garden has been spared completely so far. It's completely fine of course. Just a little unexpected.

The weather reports have been quite optimistic lately, which is why I'm so surprised by the sudden cold spells. We have had around 68 degrees (20 degrees Celsius) during the day and 45 degrees (7 degrees Celsius) at night. It's actually a bit strange that the temperatures can fluctuate so much locally.

Of course, it's fall time in my garden. I tried to avoid growing vegetables that might freeze this time of the year. Carrots and black salsify are safe underground. And leafy greens like lettuce as well as some cabbages can do just fine even when the temperatures drop. My tomatoes in the polytunnel are a different story though. They can be difficult to salvage if we have frost in the garden. But the polytunnel seems to have done its job. 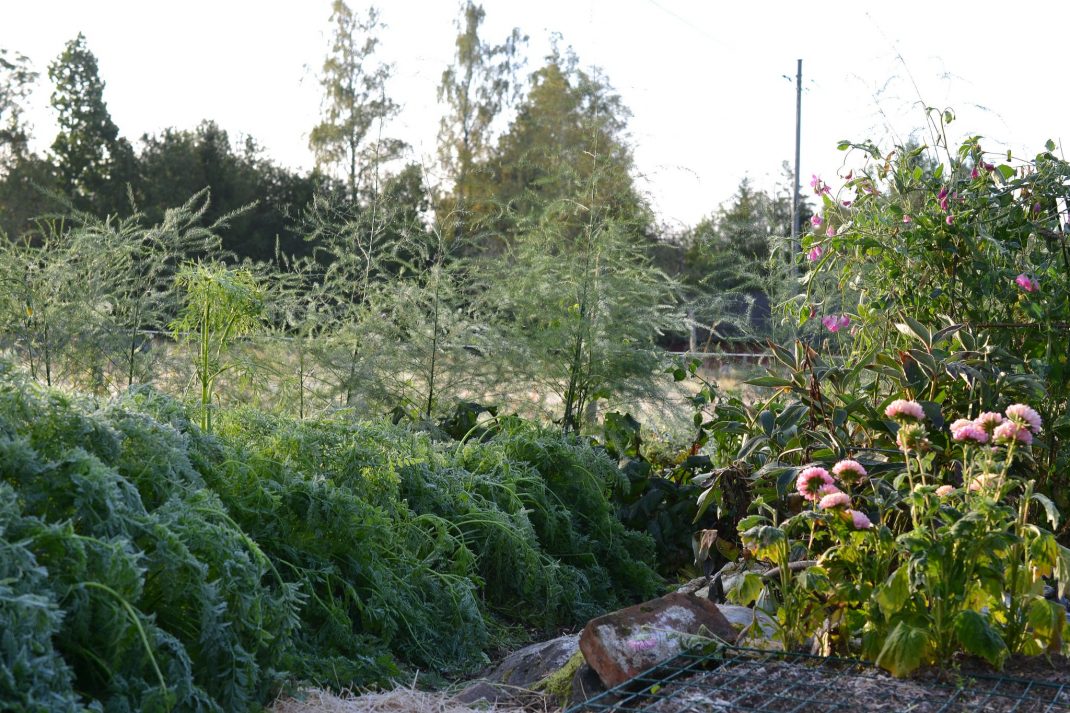 The carrots on the left don't exactly seem to be enjoying themselves. But they are actually fine for now and I don't need to feel stressed about harvesting them yet. 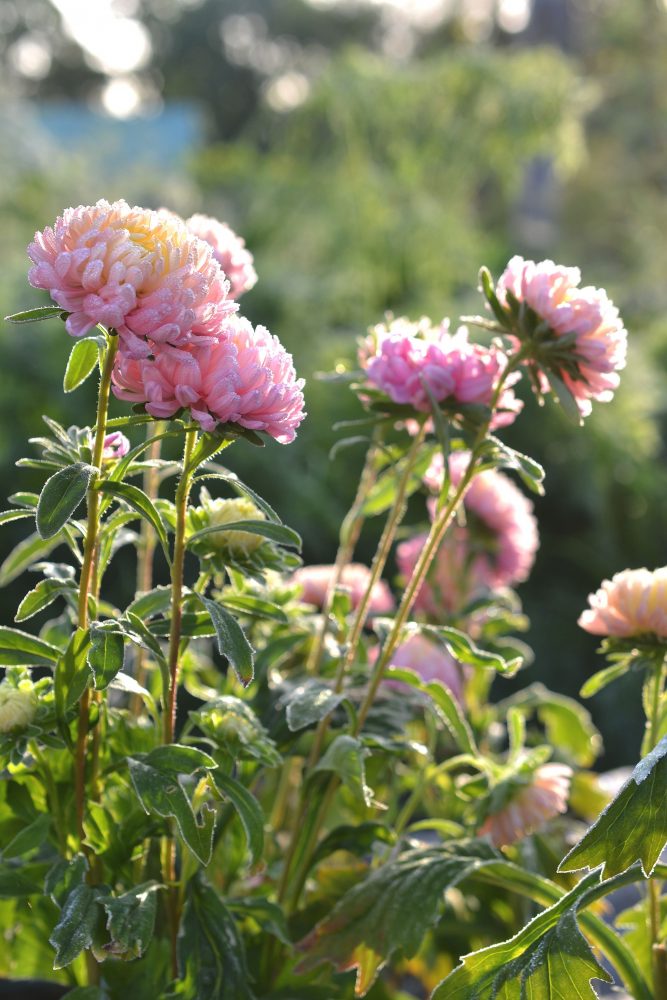 I'm a bit disappointed that I didn't get to pick these beautiful asters before we had frost in the garden.

My beets, celery roots and corn worry me the most right now.

The corn plants are easily destroyed by frost, but the cobs can actually keep ripening if the cold spell is temporary. I'm going to leave them as long as I can since we had a cold spring and the plants grew slowly in the beginning. These types of situations is exactly why I want to start corn indoors before I put the plants outside. You never know. A great season with healthy plants can be ruined by a single night of frost in the garden. That's why we want to use plants that we can harvest as soon as possible. At least up here in zone 3!

Beets and celery roots grow more above the ground than underneath it, which is why I want to harvest them pretty soon. The celery roots haven't been growing very well this year though. Instead, they were basically smothered by my field peas. So I'm happy with whatever I get this year. I'm hoping to get better results next season! 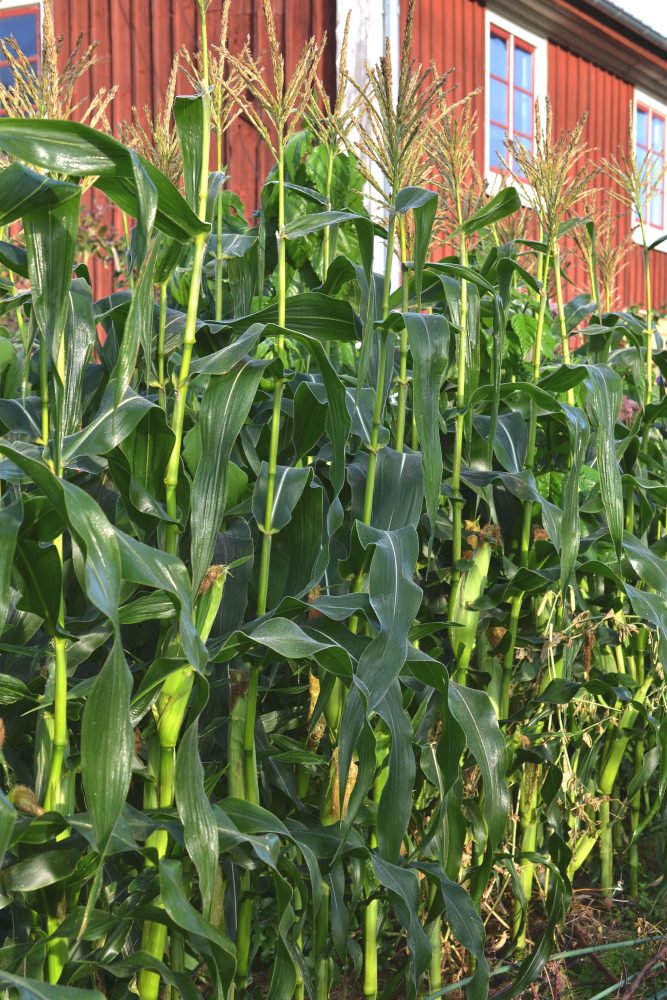 My large corn plants might just make it this time? The frost thaws as soon as the sun rises, but I wonder what the plants will look like afterwards... 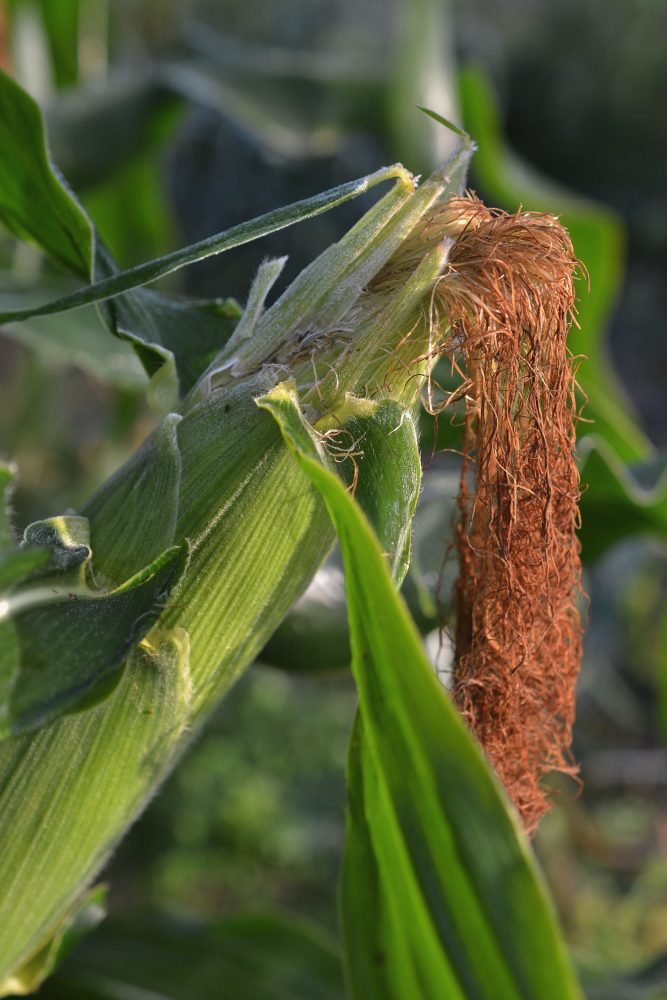 This part of the cob looks a bit wilted, but the corn itself isn't yellow yet. I want them to get a chance to ripen completely. Lots of decisions when we have frost in the garden! 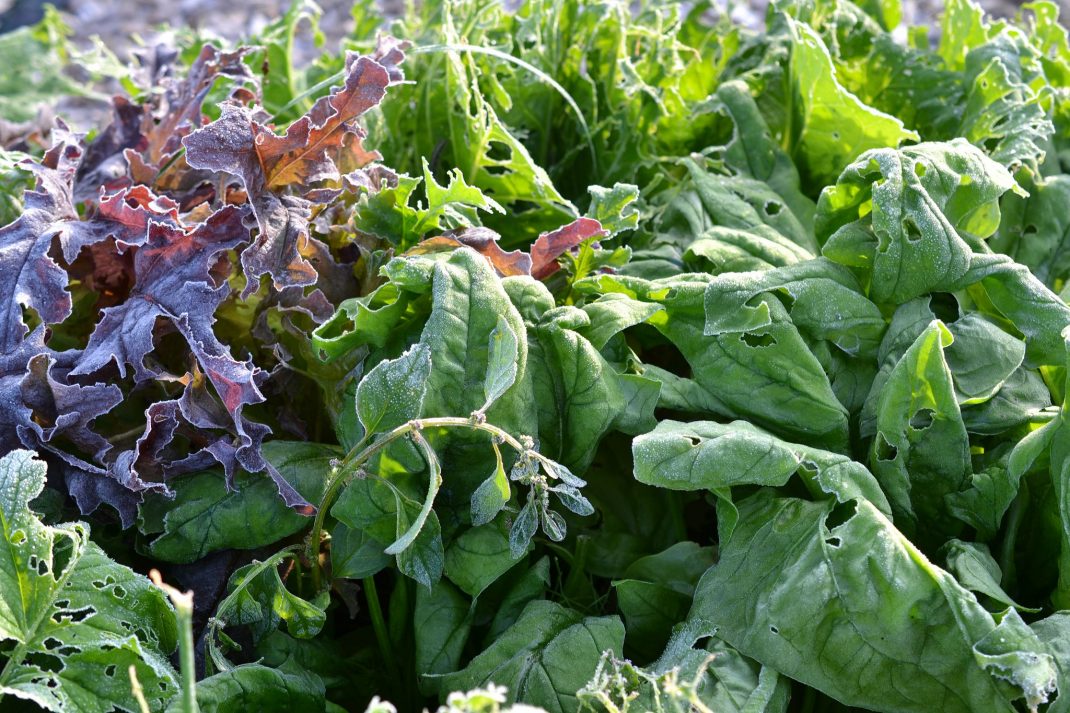 Spinach and leaf lettuce do fine even if we have frost in the garden. Leaf lettuce is quite hardy and you can easily get the plants out of the ground and overwinter them in your greenhouse. 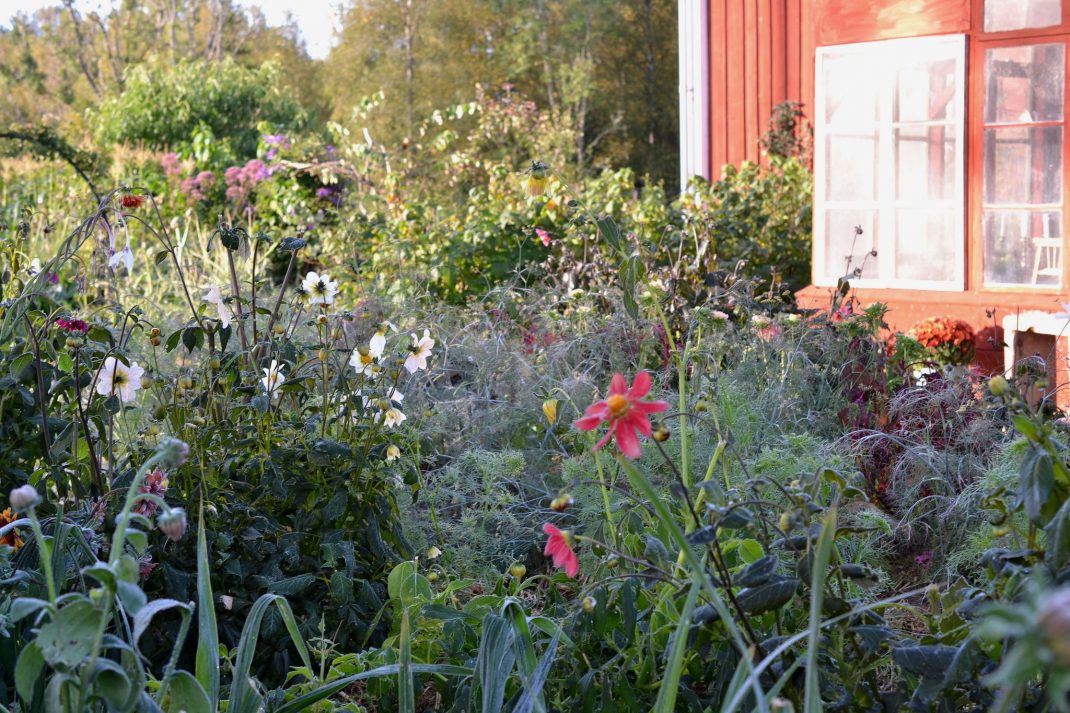 The dahlias completely withered away tonight. They look absolutely perfect in early morning when still frozen. But the damages show as soon as the plants thaw. With hanging stalks and leaves. 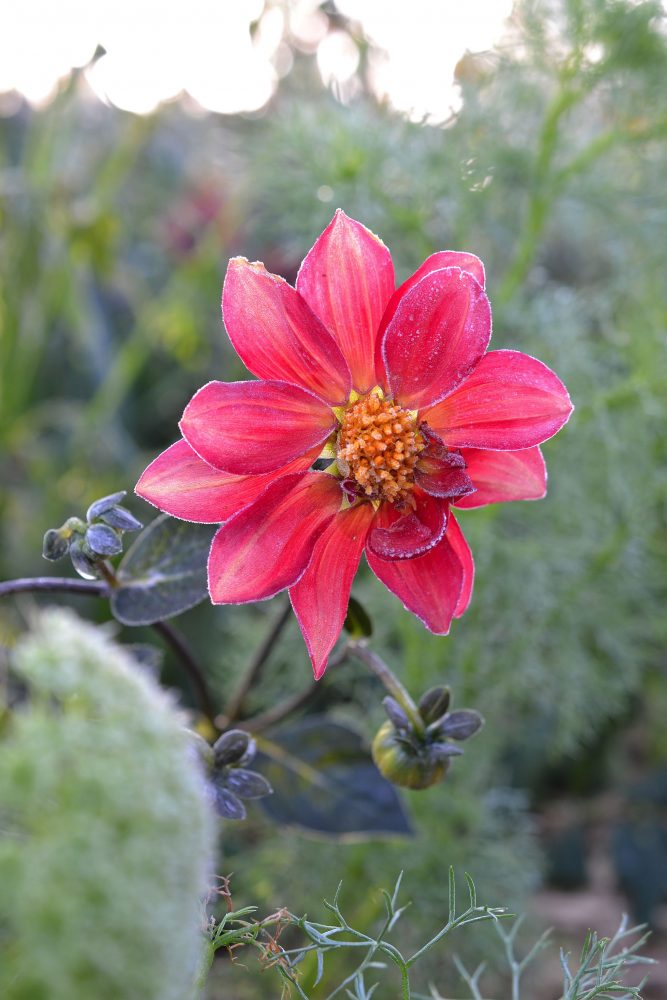 This beautiful dahlia is called Fantasia. A variety I sowed early this year. I really appreciate these flowers!

Most of my vegetables seem to be doing just fine despite the frost. But I'm actually quite sad about my dahlias. The first night of frost in the garden took them out completely. And I didn't even have time to pick the last ones!