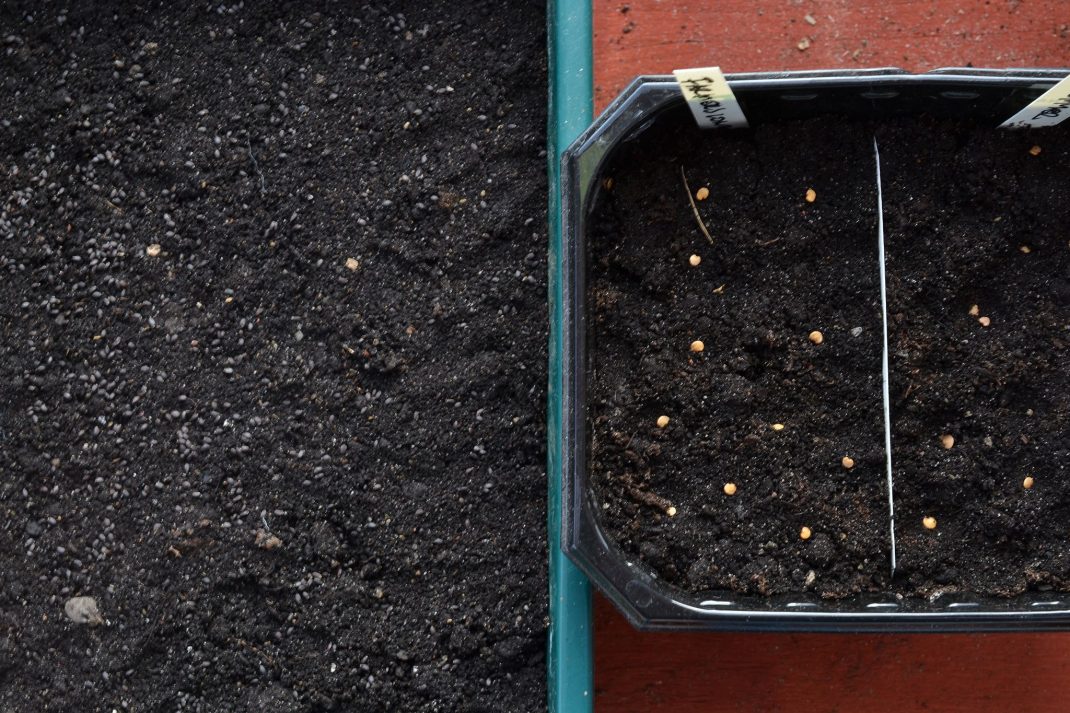 You probably know that there are several different sowing methods out there. One of my favorites is called broadcast seeding. Beginners often think that they should sow their seeds in individual pots. But did you know that you can sow many varieties of seeds close together? You can either split the seedlings up later or wait and harvest the plants right where you sowed them. Broadcast seeding is especially helpful when we want to start seeds indoors in winter, but we can do a regular winter sowing this way too. Or for that matter broadcast-sow summer flowers. Keep reading to learn more!

So, what is broadcast seeding? Well, it basically means to scatter or place the seeds on the ground, quite close together. The opposite to this method would of course be to make individual little holes for one or a small number of seeds in each spot.

Remember to use a shallow trough when you want to do broadcast seeding at home. If you use this method to pre-cultivate new plants, then you need to separate the seedlings at some point anyway. There's no need to waste a thick layer of soil doing that. Using too much soil can actually be outright detrimental for your new plants, if the layer of soil gets wet and heavy and smothers the roots. If you decide to do a broadcast seeding of microgreens, you really don't need much soil at all since the root systems are relatively small when the plants grow so close together. On top of that, you need to remember that these plants won't grow forever if you harvest them several times in a short space of time.

Did you know that there's basically no limit to how close you can put the seeds when you do broadcast seeding? Watch the video above to see what I mean. You can of course choose to sow them a little more sparesly too. The general idea is that the smaller the plant, (for example microgreens), the tighter you can sow the seeds. If you want to grow larger leaves or plants though, then you might want to give them a little more space to grow. Spinach is one good example of this. You can either do a broadcast seeding for microgreens, or give them more space if you want to harvest larger spinach leaves.

If you however want larger plants but still do broadcast seeding without transplanting at the right time, then the plants might get very stressed about not getting the space they need. This can lead to some strange behaviours where the plants suddenly bolt, stop producing leaves or just wither completely. 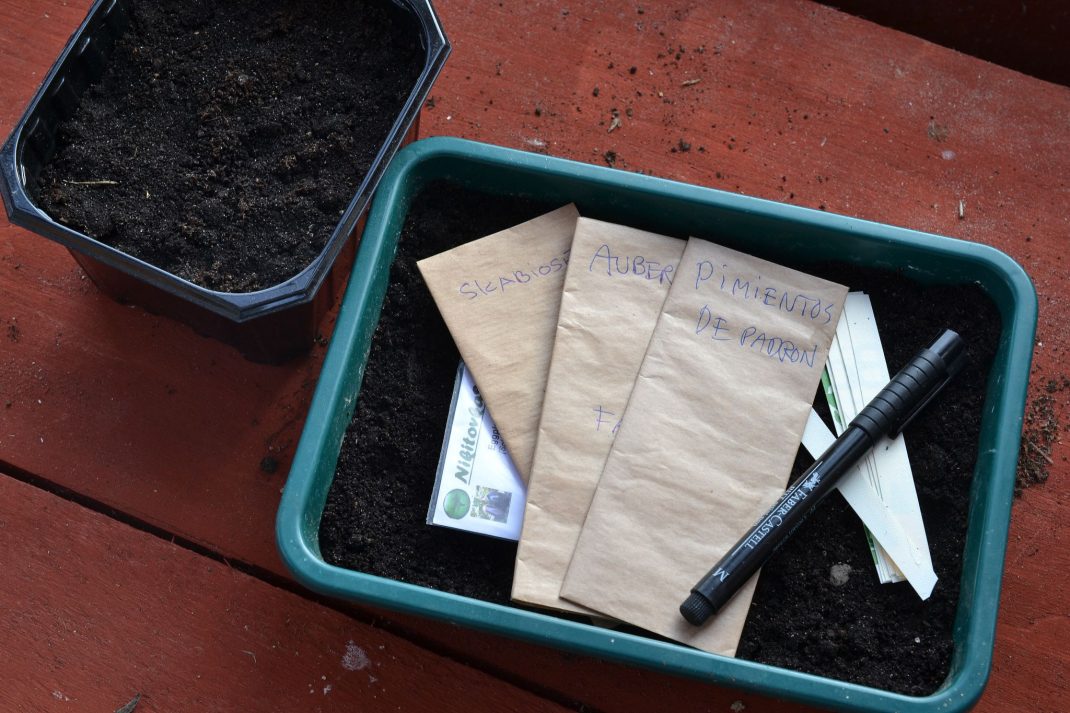 I'm preparing to do broadcast seeding with two troughs, a few seed packets and labels. 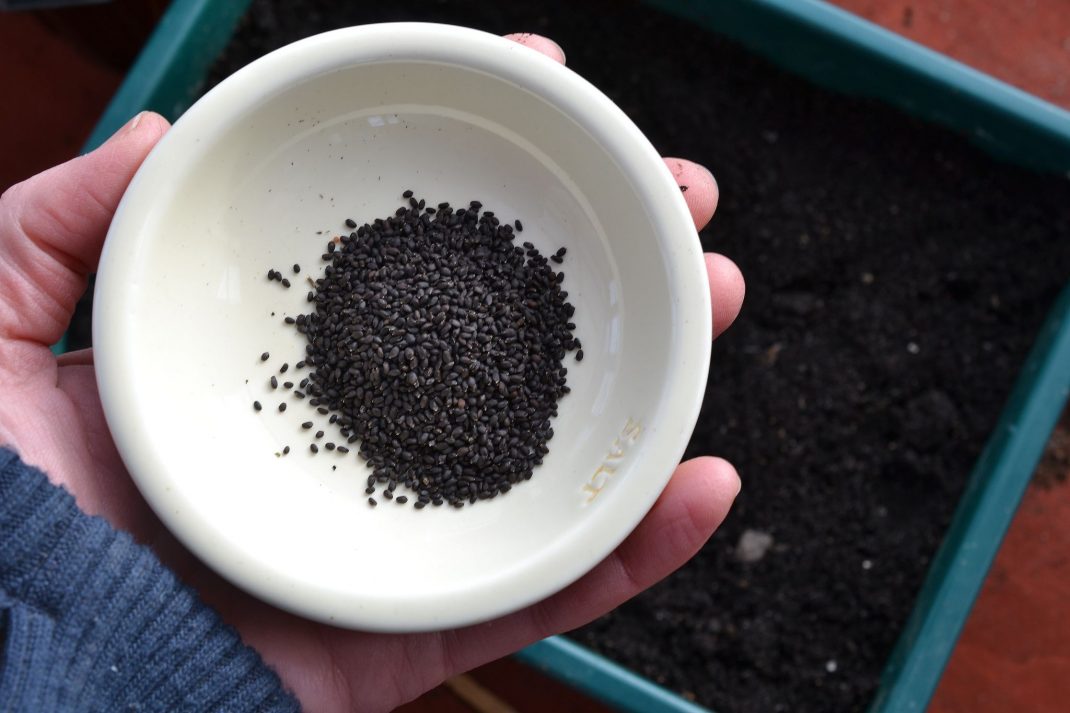 I'm broadcast seeding basil here and plan on dividing the little seedling tufts to put them in individual pots later.

If you want to try doing broadcast seeding indoors, you can give tomato seeds a try. Simply scatter a packet of seeds on top of the soil in your chosen spot. I was able to sow around 40 tomato plants of a low-growing variety in a recycled grape box. The seeds then germinated and grew so nicely here. Then, I separated them when they started growing a bit bigger and put each plant in a pot of their own.

Using broadcast seeding for pre-cultivation is so convenient. Just imagine how difficult it would be to fit all these little seeds in individual pots. I wouldn't have many plants to show off!

Read more: How to prick out seedlings 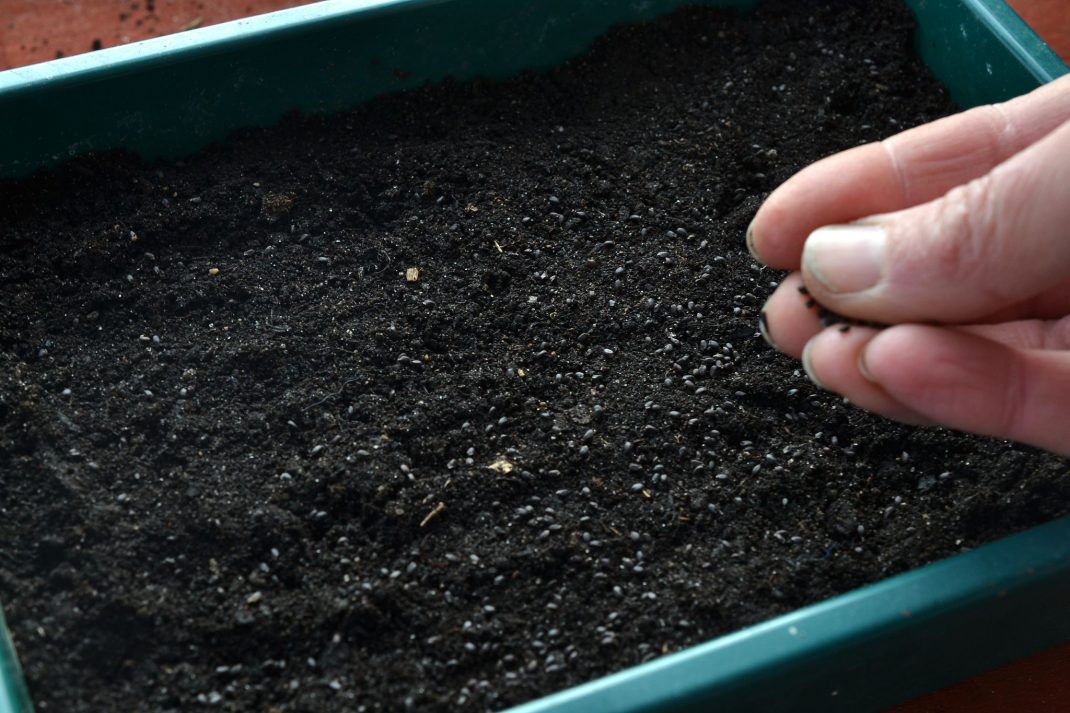 There's no reason to sow your seeds one by one. Why not just try broadcast seeding on top of the soil in a trough and then split up the tufts? 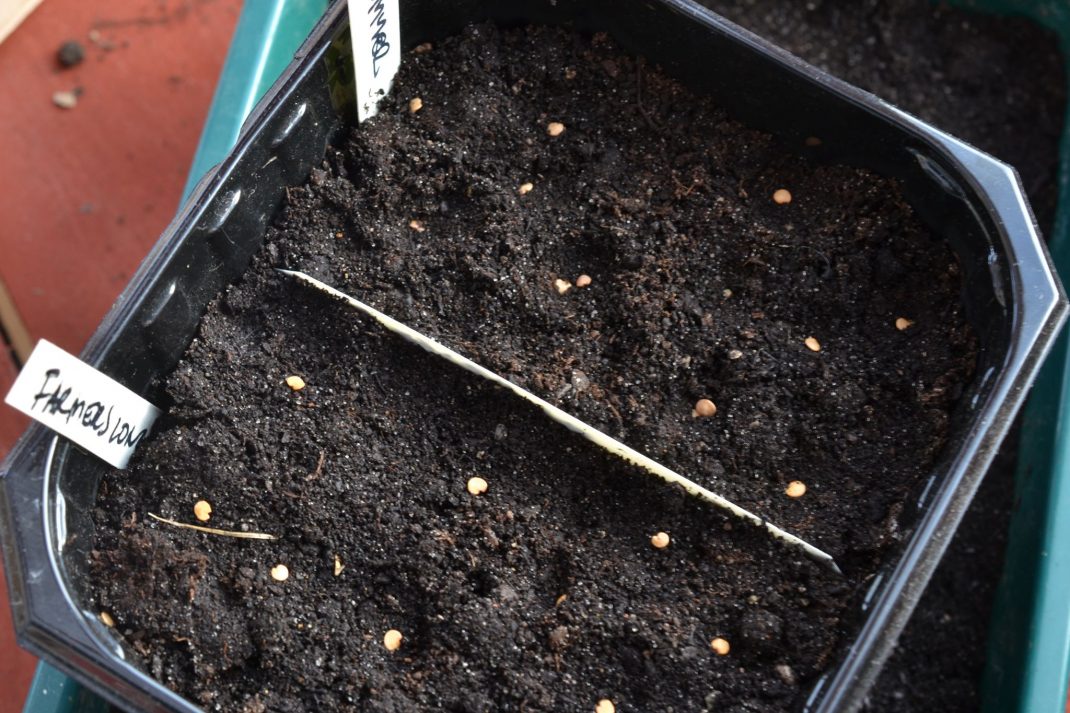 Broadcast seeding can also mean sowing many seeds together in a pot, but with a little space between the seeds. I decided to put two eggplant varieties in this trough.

This is by far my favorite method of growing microgreens in troughs, grow boxes or raised beds here at home. I get these beautiful thick green mats of leaves that I can use for my salads and sandwiches, among other things. It's so fun!

You can either grow just one leafy green in these spots or do broadcast seeding with a mix of different seeds. I do however recommend picking varieties that germinate and grow at around the same rate. You could for example go for:

You can use this method to do broadcast seeding indoors in winter and then outside during spring, summer and fall. 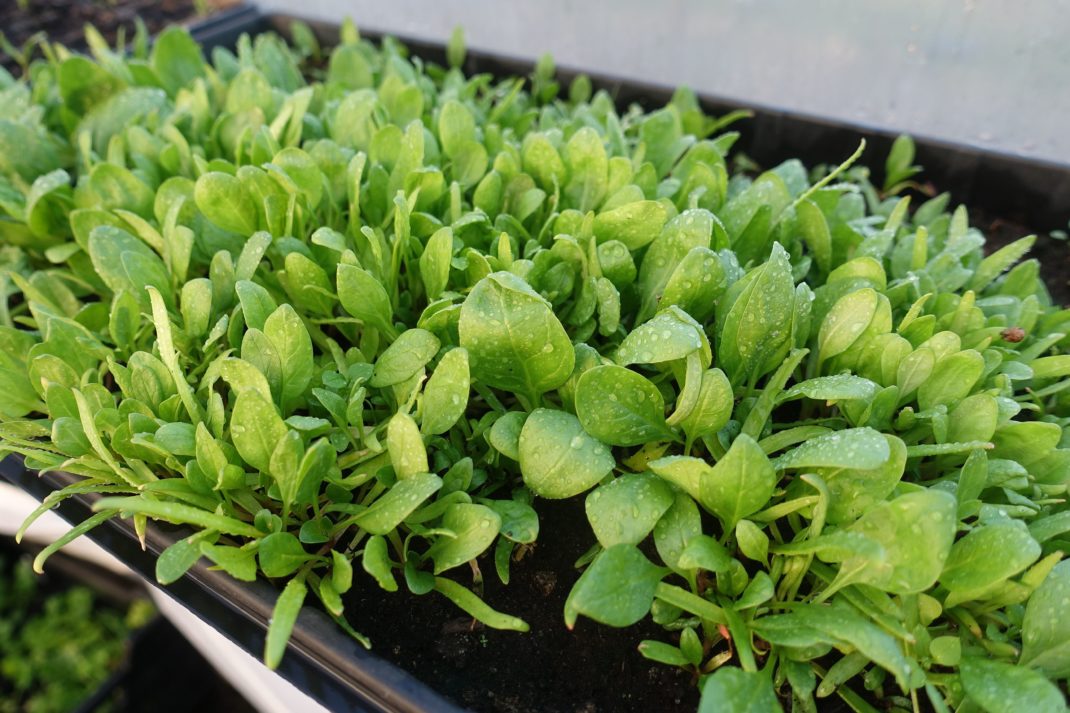 A shallow trough with just an inch of soil is all you need to do broadcast seeding for microgreens! 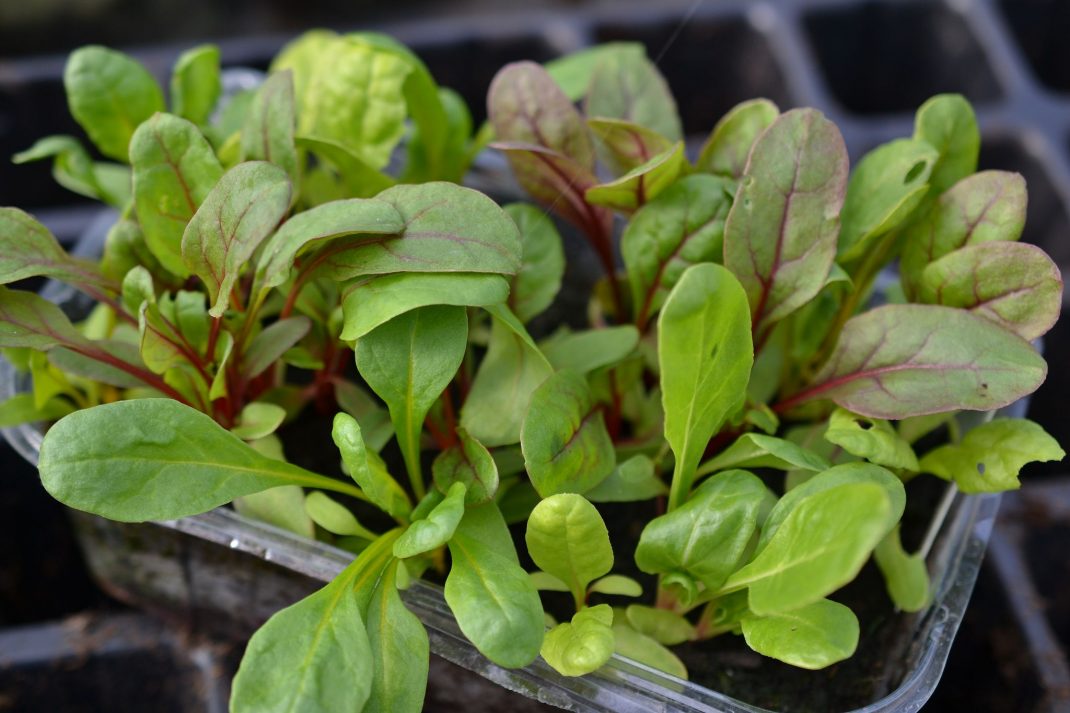 Here we have my new little chard seedlings. Look at the number of plants I got by broadcast seeding! I just turn the trough upside down, divide the seedlings and then put them in individual pots.

More: Sow on top of the snow

The reason why I want you to use a shallow trough and just a little bit of soil is because the microgreen roots are so small. You simply don't need more soil than that for these types of projects. I also think that it's unnecessary to waste the extra soil. Generally, it's actually easier to succeed with a smaller amount, simply because the microgreens are sensitive and the roots might suffer in very heavy and wet soil.

My best advice is to completely skip over the individual sowings this year. It just takes up way too much space and it won't help you succeed either. If you still decide to sow your seeds one by one, then I recommend using tiny little pots or even better, plug trays. Using plug trays is a great way to get healthy, separated seedlings while saving space in your garden.

2 responses to “Guide to Broadcast Seeding in the Garden”