Don't put your tomatoes on the window sill to ripen. I ripen tomatoes in a cool and dark space instead. That way, I get enough tomatoes for months since they ripen gradually over time. 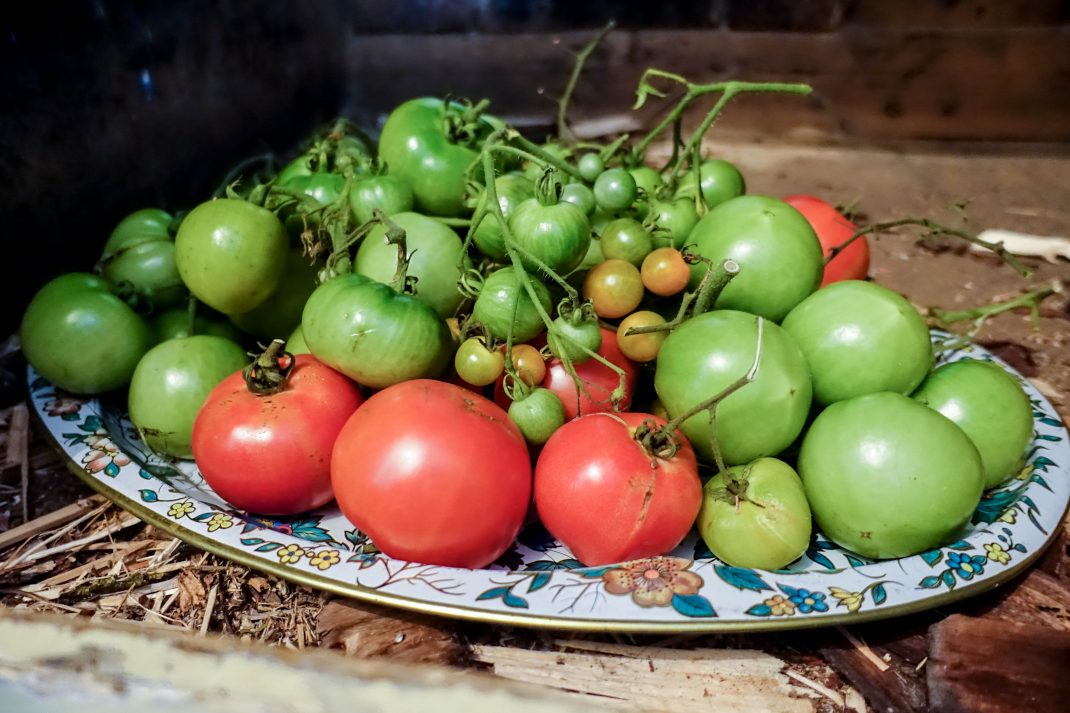 Look at all those tomatoes! They won't ripen outside now in fall and some of them actually didn't in summer either. It has been a good year for tomatoes in Sweden, all in all. We still have more than enough of them. But some of them are still green.

Fall is here and it's time to harvest my green tomatoes and bring them inside. I just need find somewhere to put them all! I'll take a few crates at a time so I'll be able to take care of all my tomatoes.

As you might have noticed by now, I grow a lot of tomatoes. We can't possibly keep up and eat them all at once, so I plan to store most of them and use them later when they are ripe. I always put some of them in the freezer too. It's really convenient to just grab a few when I cook.  You could of course always pickle green tomatoes or make a green tomato marmalade, but tomatoes are just best eaten fresh and ripe in my opinion.

Most people ripen tomatoes in room temperature, often in the window sill. That's not how I do it though. The tomatoes will get ripe very quickly in a warm spot. We just wouldn't have time to eat or eat that many tomatoes at the same time.

Instead, I put my tomatoes in a dark and cool space. Just not in the fridge. Right now, there's actually one batch under the staircase where I store my firewood. I'll put another batch in an unused bedroom upstairs a bit later. It actually works! I check on my tomatoes a few times every week and take the ones that look ripe enough.

One thing that you might want to think about is to always put your tomatoes on trays. That way, you won't have to clean up tomato juice from the floor if a tomato where to go bad. My tomatoes rarely ripen completely when they are outside. But there's still hope for them if I put them indoors.

Look out for blight

This year, I decided to grow tomatoes of the Crimson Crush F1 variety. The variety is actually blight-resistant. I keep these tomatoes away from the others.

Tomatoes are quite sensitive to these infestations. It might not show on the tomatoes at first, but they can turn brown quickly when you take them inside. And it can spread to all of your tomatoes in a matter of days. So when I see a single rotten tomato in my harvest, I always make sure to take care of the green tomatoes inside straight away. You could always freeze the green tomatoes and cook them later.

Don't use apples to ripen tomatoes

A lot of people put apples with their tomatoes to make them ripen faster. But speed is actually not on my mind when I want to ripen tomatoes. It will take as long as it takes and they will do perfectly fine without the apples. The not quite fully grown tomatoes will still ripen with some time, but the really underdeveloped ones might not.

Letting your tomatoes ripen slowly indoors means that you will have a ready supply of tomatoes for a long time. We sometimes have tomatoes even in February, the regular varieties. So I definitely recommend this method. Good luck!