Guide to Growing Potatoes at Home

Are you dreaming about growing potatoes in your own garden? You're in luck! Potatoes thrive in most settings. Read everything you need to know about getting started below. 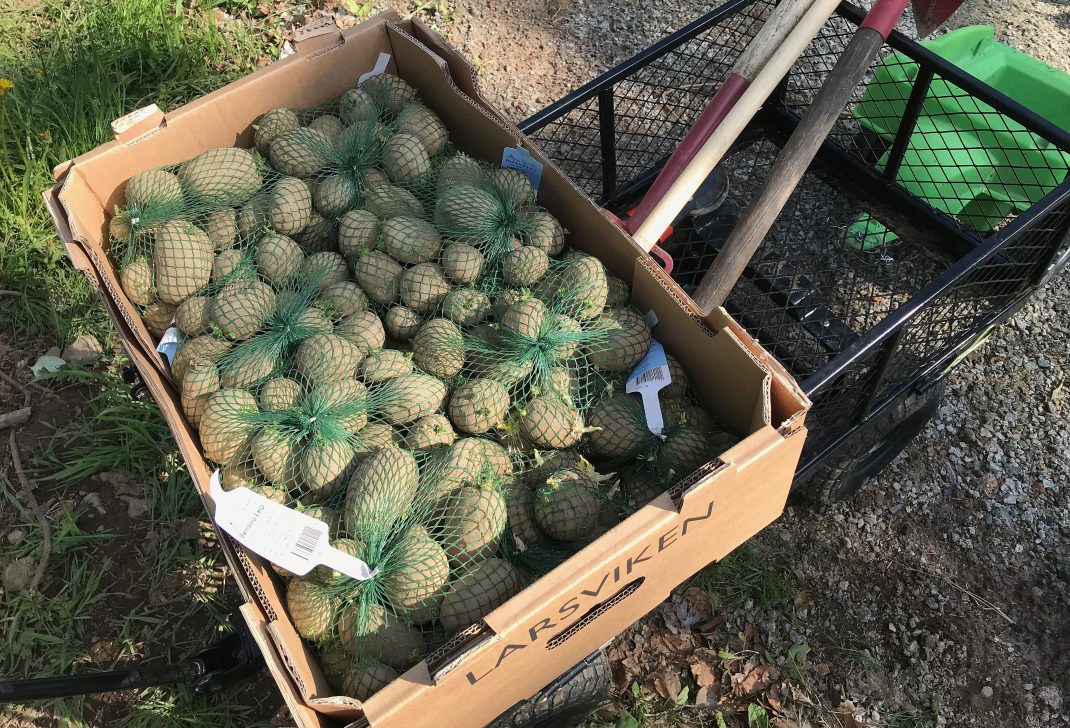 Seed potatoes often come in nets like these. We planted this batch in our communal garden here in the village last year. Do you want to learn more about growing potatoes at home? Keep reading!

My first batch of seed potatoes are here! It's time to start chitting an early variety and let myself dream about the first potato harvest of the year. The varieties I'm growing now are Amandine, Anya, Venezia and the extra early variety Casablanca.

Are you going to grow potatoes this year too? Perhaps it's your first time! I wanted to share a few simple and helpful tips for anyone getting started now. No need for special solutions or extravagant methods. Find out everything you need to know about growing potatoes in the easiest and most efficient way below!

Read more: How to grow potatoes in a raised bed

Potatoes grow in the ground. First, we plant a potato that starts to develop new little roots. These roots will in turn produce new potatoes. Some varieties produce more than others, but I'd say that you get around 2.3 lbs (1 kg) from each seed potato. So, where can you get seed potatoes then? Well, your best bet is a garden center or online store. Just search for seed potato to find more information. You want to order your potatoes in late fall or early winter. Many stores run out of the most popular varieties in spring. Make sure that the tubers that you get are certified seed potatoes.

Don't use regular potatoes that you get from the supermarket! They can be manipulated in different ways and possibly also transfer diseases to the soil. 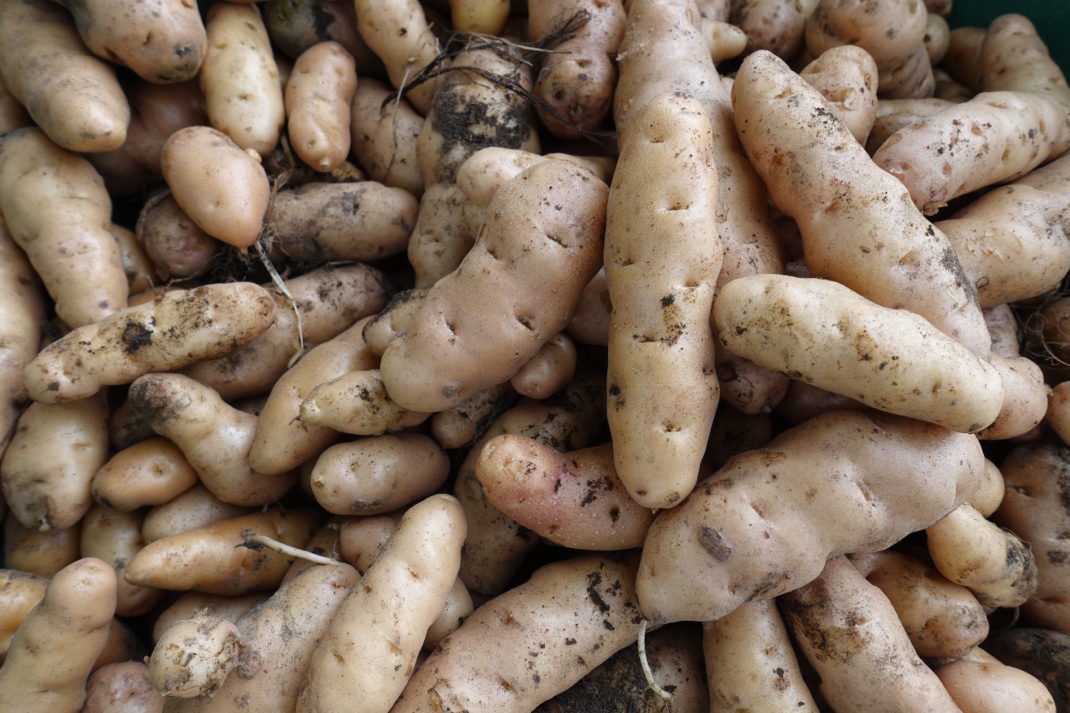 This is the variety Anya, my family absolutely loves it. The potatoes are oblong and taste wonderful boiled or baked.

You might want to pre-sprout the potatoes before you put them in the ground outside. This gives them a better start and you can harvest them earlier too. You can usually find information about how long your variety takes to grow on the packaging. I harvest the early variety Casablanca 6-7 weeks after planting. If the soil is reasonably warm, that is.

I sometimes cheat a little in the garden. For example by chitting the potatoes indoors before I plant them. I do this to get an extra early harvest.

Some people let their potatoes sit indoors in daylight for a few weeks before they plant them, perhaps in an egg carton or on a tray. I've tried it and found that it doesn't actually buy me that much more time. So I prefer to root the potatoes properly before I take them outside.

I store the varieties that I don't want to root in a cool and dark space. For example in an outdoor shed or the fridge.

Most people will however grow their potatoes in regular beds filled with soil.

I know that you want to start planting. But don't get too excited to take the potatoes outside! You need to wait until the soil warms up a bit. I live in zone 3 and we can get frosty nights here even in spring, which is why I plant mine in April. I start with the greenhouse potatoes and then I take the others outside later the same month. If you live even further north than I do, you should wait a bit longer. May or June is a better time. The goal is a soil temperature of 46-50 degrees (8-10 degrees Celsius).

Create a large furrow. It should be around 7.8 inches (20 cm) deep. Try to put the early potatoes around 1 ft (30 cm) apart and leave a bit more space between the later varieties. It doesn't matter which part goes up or down unless you rooted the potatoes first. In that case, the rooted end needs to be in the bottom. Rake soil over the potatoes until you create little ridges running next to the furrows.

You can fit around 8-10 seed potatoes in a regular-sized cold frame or raised bed.

The potatoes are sensitive to sunlight and the tubers start going green if exposed to direct sunlight. The substance responsible for the change of color is poisonous if you consume too much. That's why we want to protect the seed potatoes and our new growing tubers by surrounding them with soil. Another great way is to do this is to cover the rows of with straw, leaves or other types of plant material.

More: Getting an early harvest of potatoes

The potatoes generally like a sunny spot in the garden, but you can grow it in a darker area too. I actually used to grow potatoes in complete shade on the north side of my house with okay results. The plant becomes bushier when you grow it in shade, but you get a nice batch of potatoes too. 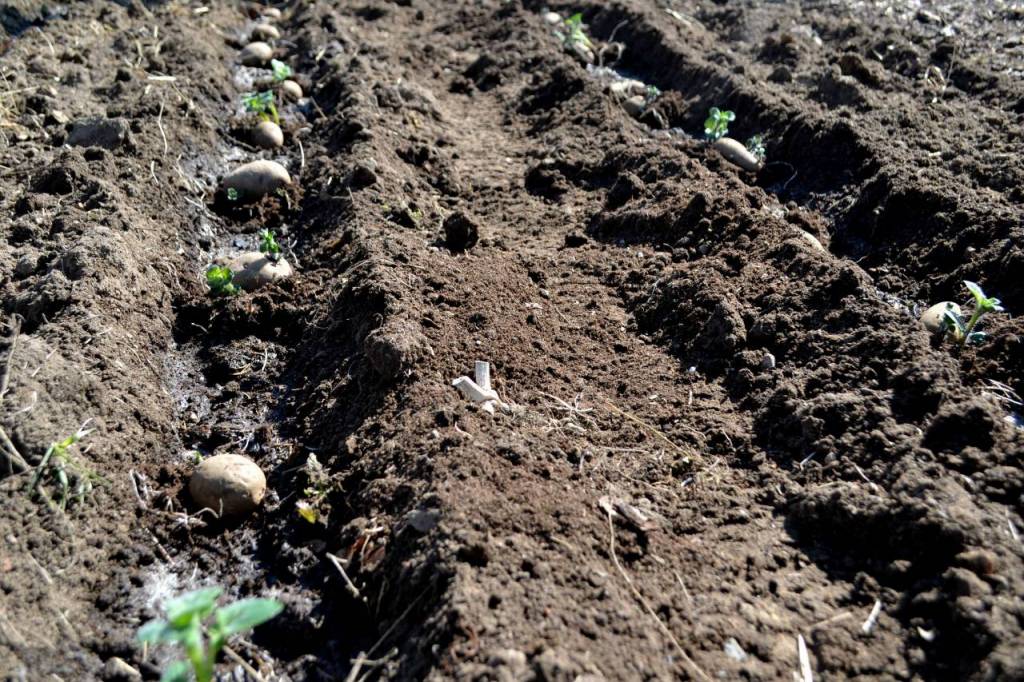 I made furrows in the beds, watered them and then planted my rooted potatoes. I'm covering the furrows with soil to block the sunlight out. Growing potatoes is so fun!

It's time to start looking for the new little tubers after around three months. If you don't know if there are any potatoes in the ground, then you can just push your hand down into the soil next to the plant and feel if there's anything there. So, you don't need to remove the entire plant to know what's going on. This is also a great way to harvest individual potatoes from every plant early in the season. 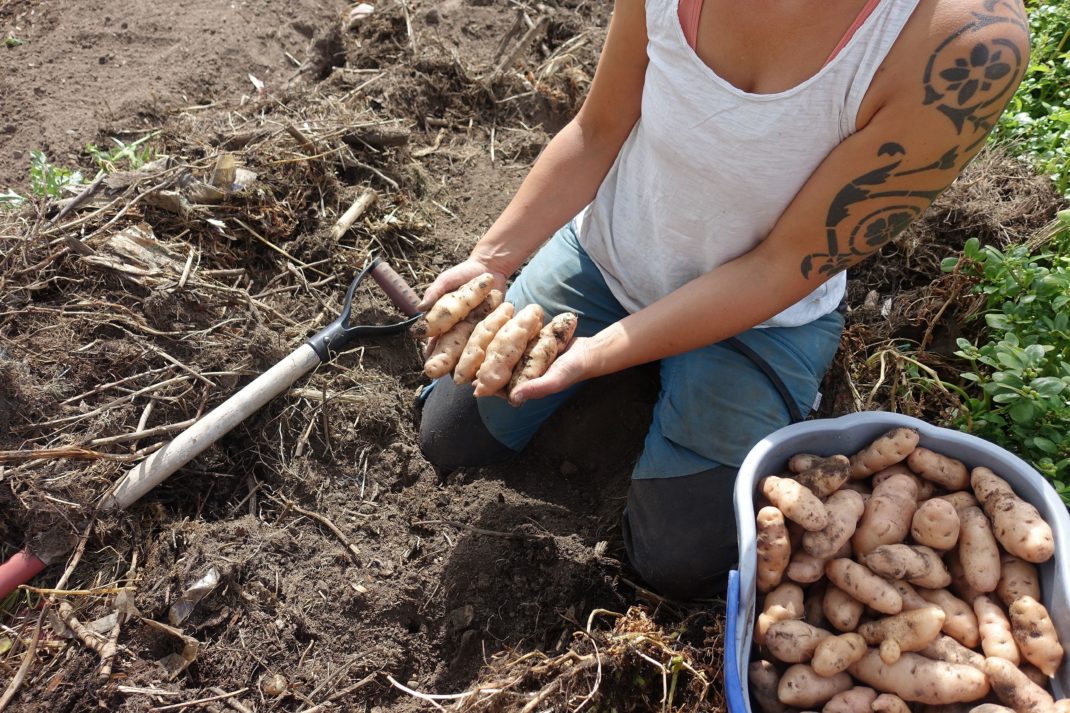 Look at all these delicious potatoes! The variety Anya is oblong and soft. The potatoes can break if you boil them too aggressively.

I absolutely loooooove growing potatoes at home. It's one of the best parts about starting your own garden. Especially because you get so much back from a single seed potato.

I'm putting my potatoes in four long beds with two rows in each this year. The early variety Casablanca is going to the raised beds in my small polytunnel. I'm hoping for a harvest already in May.

Good luck growing potatoes in your own garden!
/Sara Bäckmo 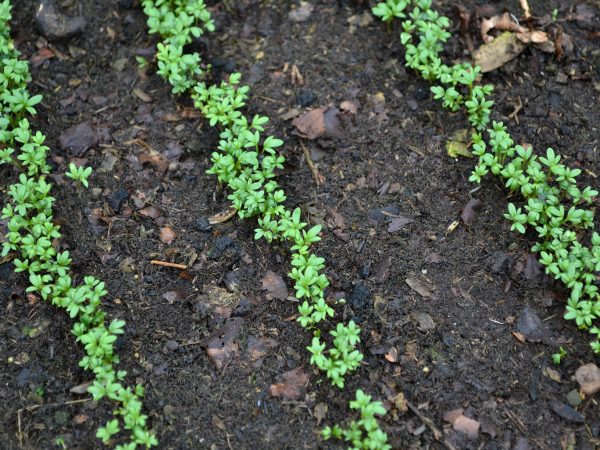 Part 1 of this series on starting a small vegetable garden was a quick guide on how to build new beds. Part 2 will be about the exciting part – growing the vegetables. 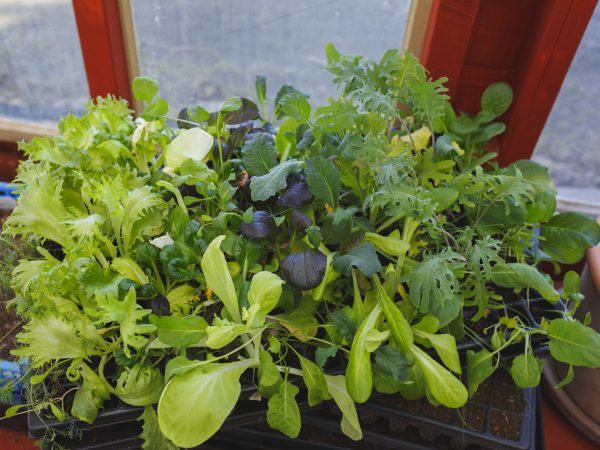 Growing Leafy Greens in a Hotbed

Row after row of new leafy greens are growing in my hotbed right now. Do you want to grow leafy greens early in a hotbed too? Keep reading to find out how.